The History of Fruit & Wine in Palisade 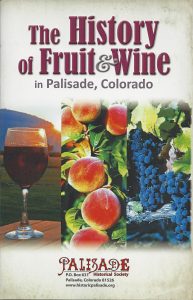 The newest publication from the Palisade Historical Society is a 36-page booklet on “The History of Fruit & Wine in Palisade, Colorado.” The cover photos are courtesy of local photographer Jim Cox. There are also historic photos and information about how we have grown the best tasting peaches in the world for over 125 years, notable inventions, as well as the more recent history of the wine industry – which includes grape growers and wineries. There is also a four page timeline of key events.

The suggested donation is $15 with a $5 discount for Historical Society Members. It is also available at the Palisade Chamber of Commerce, and at Out West Books, and the Museums of the West Gift Shop in Grand Junction. 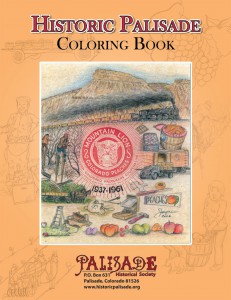 about Palisade history and peach harvest activities, including orchard hoopies and historic locations like the “Roller Dam” in DeBeque Canyon.

Now in its fourth printing, the Historic Palisade Coloring Book is provided free to second graders at Taylor Elementary and six other elementary schools, thanks to generous donations from area Rotary Clubs. It is also available at the Palisade Chamber of Commerce, Varaison Winery, DeBeque Canyon Winery, and Colorado Cellars Winery in Palisade. Out West Books and the gift shop at the Museums of the West in Grand Junction, and Fruita’s  Lithic Bookstore also carry the Historic Palisade Coloring Book. It is available for a $5.00 suggested donation to the Palisade Historical Society. Since 2011, over 2,000 students have received copies to share with their families. 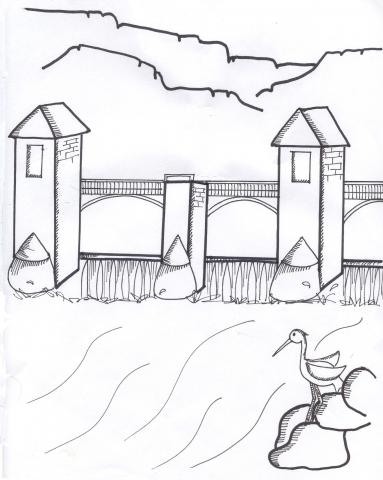 The “Roller Dam” by Melanie Kerrigan 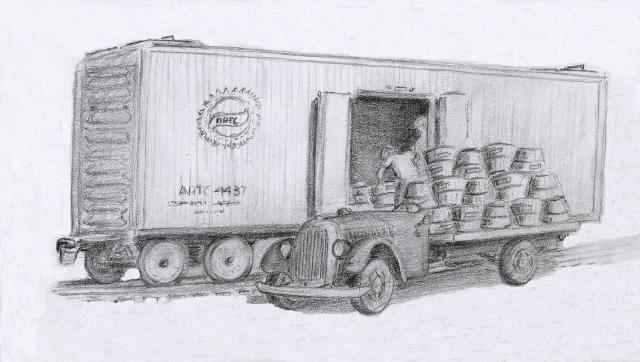 The History of Irrigation in Palisade and East Orchard Mesa, Colorado 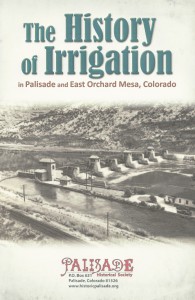 A 32-page booklet with photos and information about the history of irrigation water in the Grand Valley was created as part of the Palisade Historical Society’s celebration of the 100th birthday of the Grand River Diversion Dam, known as the “Roller Dam” in June 2015. The official congressional dedication of the Dam was June 29, 1915. This booklet highlights the surprising history of several irrigation projects, including many early projects which failed.

Though it began in 1897 and took nearly 20 years to complete,  the Grand Valley Project, which became the Grand River Diversion Dam and Government Highline Canal, is the successful solution to turning the Grand Valley into one of the most productive agricultural regions in Colorado and the Intermountain West. The Dam is located eight miles east of Palisade in DeBeque Canyon, and the Government Highline Canal stretches from Palisade to Loma, delivering irrigation water to the Price Ditch, Stub Ditch, and two canals on Orchard Mesa. Copies are available for a suggested $15 donation, or $10 for members. Or you can purchase them at the Palisade Chamber of Commerce, Varaison Vineyards in Palisade, and Colorado Cellars on East Orchard Mesa. In Grand Junction, the Museums of Western Colorado Gift Shop, and Out West Books on Main Street carry them. In Fruita, Lithic Bookstore carries copies for sale. 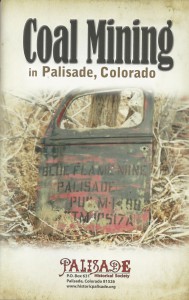 This 24-page booklet of photos and information is based on Principal Writer/Researcher, Bennett Young’s programs presented for the Historical Society and additional research. It has become the primary resource for everyone who wants to learn more about Palisade’s coal mining past and the important role it played in the Town’s development. Copies are available from the Historical Society for a suggested $15 donation, or $10 for members. Or, you can purchase it at Palisade Chamber of Commerce, DeBeque Canyon Winery and Varaison Vineyards in Palisade, and Colorado Cellars  on East Orchard Mesa. The Museums of the West Gift Shop and Out West Books in Grand Junction carry copies, and in Fruita, Lithic Bookstore has Palisade Historical Society publications for sale.

Both the Coal Mining and Irrigation History booklets are used as textbooks at Palisade High School.

The popular printed Palisade Historic Walking Tour brochure has been updated and is also available as an e-Book. Simply go to Kindle Books and use your Amazon account to download it to your tablet or cell phone. The cost is $2.99 and proceeds benefit the Palisade Historical Society. 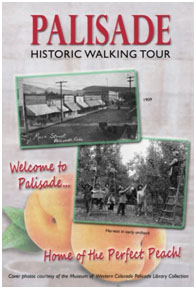 This project was inspired by historical Society member and volunteer Gayle Madden who has worked tirelessly on a number of Historical Society projects. Kent Brown, author of several e-Books, including Palisade, Colorado (2016) Hints for the Hurrying Traveler, volunteered his knowledge and electronic publishing skills to make the brochure a reality.

“This e-Book technology puts Palisade history in the palm of your hand to use when it’s convenient,” Brown said. “e-Book technology and historical walking tours are a perfect pairing.” he added. He also explained by double tapping a graphic, you can zoom in and move around to see more details. There are also active links to web-based archives which expand information if the walker chooses.

The e-Book version includes Lisa Harmons’ original artwork, and much of the text created for the printed version – which is still available on the rack outside the Palisade Chamber of Commerce, at the Palisade Branch Library in Palisade, as well as in the lobby of the Museums of Western Colorado in Grand Junction. The electronic version includes additional photos as well as as summary of Palisade history at the end of the 42 buildings and stops highlighted in the book.

Peaches and Politics in Palisade, Colorado

A Town Shaped by its Canals, Roads and Bridges 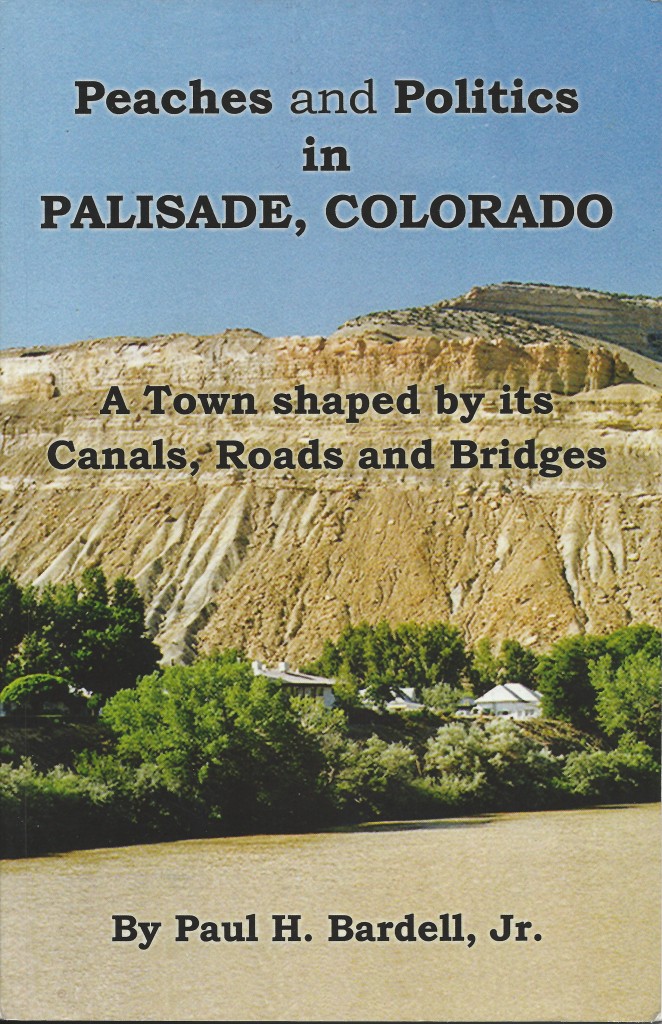 A comprehensive history of Palisade’s unique agriculture and development written by a Palisade native. Among the many features in this wonderful reference are facts about the Town’s early development with maps, plats and photos, the history various roads and bridges, Palisade area schools, Palisade Mayors from 1904-2009, and details about the area’s irrigation canals. 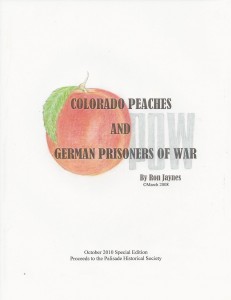 The late Ron Jaynes wrote this 16-page manuscript in 2008 after interviewing people who worked with German Prisoners of War in the summers of 1944 and 1945. The POWs lived at the former Civilian Conservation Corp. Camp in Riverbend Park south of town and were essential to harvesting peach crops during the labor shortages of World War II.

While researching photographs to commemorate the 100th birthday of the Grand River Diversion Dam’s 100th birthday, a 100 year old scrapbook was uncovered with newspaper clippings about the project and other early irrigation systems. 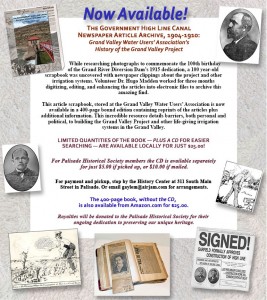 These articles, originally in a scrapbook stored at the Grand Valley Water Users’ Association, give you insight into the people and politics which make our life-giving irrigation systems possible.

The result is a 400-page bound edition and a CD which allows you to search. In addition to the articles, there are photographs, a detailed table of contents, and production notes.

For a suggested donation of $25, you can get the 400-page book and the CD from the Palisade Historical Society. The CD only is available for a $10.00 suggested donation with postage and handling. You can also order just the book only from Amazon.com. Search in Books with the title, “The Government High Line Canal Newspaper Article Archive.”

The Maddens have graciously donated royalties from the publication will benefit the Palisade Historical Society.