We offer different, hour+-long tours as requested and for special events. Featured tours include  “An Hour with Colonel Bower” highlights this Palisade Pioneer’s life and what Palisade was like along 3rd Street from the Post Office to Bower Avenue.  Another tour features the Town’s Center and focuses on businesses and homes near the Plaza at 3rd and Main Streets. “Fire and Brimstone” is the longest route – about 4,000 steps, taking in the area surrounding downtown. Highlights of this tour are sites of major fires, including packing sheds, the hotel, and the cannery, plus seven churches, two former depots, one of Wayne Aspinall’s homes, the 4th Street bridge, and more. A tour of Riverbend Park  features the site of the Civilian Conservation Corp. Camp built for workers in 1935 and later housed German Prisoners of War, and more than a mile to the west, the Migrant Labor Camp where 200 cabins housed seasonal workers and their families during harvests from 1941-1961. To schedule a tour for groups of four or more, please call (970) 464-2177.

For self-guided tours, pick up a Palisade Historic Walking Tour brochure from the  rack under the Historic Palisade signs on the south wall of Food Town and outside the Palisade Chamber Office at 305 South Main Street or inside the Palisade Branch Library at 119 West Third Street in Downtown Palisade. 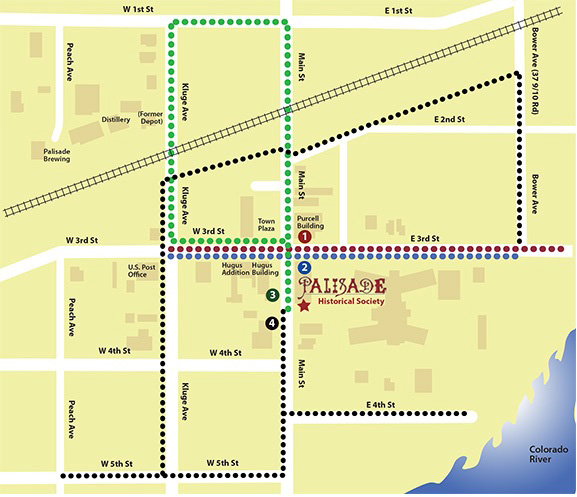